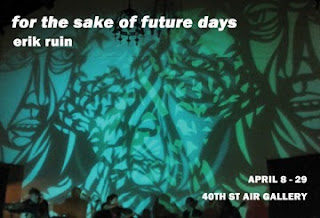 OPENING RECEPTION-  Friday April 8th, 6-9 PM
w/ live music by Charles Cohen and Jeff Cain (Ghostwriters) and dronescapes by John the Baptist (Kellzo from SGNLS)
For the Sake of Future Days is a densely layered floor-to-ceiling installation incorporating shadow projections, built structures, and various hand-painted, -printed & -cut elements. The central image/ theme is that of a world in the midst of extreme tumult & transformation. The installation functions  like speculative fiction showing a world just shy of the terminal end-point of today’s trends toward environmental devastation, economic collapse, income disparity and social fragmentation/alienation.  At the same time, it weaves in more hopeful strands/possibilities- people banding together in the face of adversity, the reclamation of public space & resources, the simple acts of generosity and ingenuity that point towards a brighter future.
Future Days is a unique, fully integrated & immersive environment. Ramshackle structures made of salvaged wood, cardboard & windows contain intricate shadow-scenes depicting  interiors and inhabitants. Wall paintings incorporate the city-structures into a surrounding landscape- ravaged by war and pollution, yet in the process of being reclaimed, rebuilt and rehabilitated. The whole is dramatically lit, and decorated/complicated with printed/collaged elements and cut, folded and draped paper and fabric.
This installation draws upon and integrates the various strands of my practice as a printmaker, shadow-puppeteer, illustrator, muralist, zine-maker, editor,  etc. as well as past installation work, both solo and collaboratively as a member of the international Justseeds Artists’ Cooperative. Photo sets of this work are available online here-
Out Of the Shell of the Old (Justseeds at Space 1026, Philadelphia) http://www.flickr.com/photos/visualresistance/sets/72157606053422306/
Which Side Are You On? (Justseeds at Union Art Gallery, UW-M, Milwaukee)
http://www.flickr.com/photos/visualresistance/sets/72157615873790728/
Liberation (solo installation, Dirt Palace, Providence)
http://www.flickr.com/photos/dirtpalace/tags/erik/
ERIK RUIN is a Michigan-raised, Philly-based printmaker, shadow-puppeteer, and occasional editor/publisher of various publications, most recently the anthology Realizing the Impossible: Art Against Authority (w/ Josh MacPhee, AK Press,2007).


As a performer, he has toured extensively in the U.S. and in Europe, and has been featured at such events as the Puppetropolis Festival in Chicago, Black Sheep Puppet Festival in Pittsburgh and at the Fitzgerald Theater in St. Paul.  He has worked as shadow sequence director for Barebones Productions' annual community-based Halloween extravaganzas.  His theatrical work is focused on creating "epic theater" projects (such as the dystopian allegorical musical The Nothing Factory) incorporating dramatic performance, live music, projections, banners and more to create a total experience.  He also creates improvised overhead projector performances with experimental musicians such as Katt Hernandez  and Charles Cohen.


As a visual artist, he frequently works collaboratively with other artists or with activist campaigns, and has created imagery for organizations engaged in work ranging from urban farming to housing cooperatives to prisoner advocacy. In 2006, he banded together with twelve other radical artists to create the Justseeds Artists Cooperative, a  national network which distributes their work and  fosters creative alliances with social movements.  Justseeds has gone on to exhibit worldwide, and recently won the Gran Prix at the Slovenian Graphic Arts Biennial.


Ongoing projects include the Liberation Banner Project, an open-source, open-edition set of silkscreened banners on the theme of "liberation", supported by a 2006 grant from the Puffin Foundation and further developed during a July 2009 residency at AS220 in Providence, RI.

He is currently an Artist-In-Residence  at the 40th St. AIR Program in Philadelphia. Forthcoming exhibitions include a solo installation at the AIR Gallery, and Justseeds installations at the Slovenia and Pittsburgh Biennials.
Posted by 40th St Artist in Residence Program at 2:54 PM