The 40th Street Artist-in-Residence program, located at 40th and Chestnut streets, provides five artists from West Philadelphia studio space for one year. The program has served over 30 artists since its creation in 2002.

The 40th Street Artist-in-Residence program, located at 40th and Chestnut streets, provides five artists from West Philadelphia studio space for one year. The program has served over 30 artists since its creation in 2002.

The 40th Street Artist-in-Residence (AIR) and ArtsEdge programs aim to provide emerging West Philadelphia artists an opportunity to devote themselves to their art without distraction.

AIR, which offers local artists free work space, was founded in 2003 by artist Edward Epstein in collaboration with Facilities and Real Estate Services.

ArtsEdge, entering its second year, offers subsidized studio and living space for two artists per year — a writer and a visual artist — sponsored by the Kelly Writers House and the School of Design, respectively.

These programs provide artists a space where they can work independently, when emerging artists would otherwise experience geographic and financial constraints, said Ed Datz, executive director of real estate for the University.

AIR, having served almost 30 artists during its lifetime, has undergone several changes. Originally, the program supported four artists on a six-month residency, but has now added another artist, Epstein said. Residencies now run a full year.

The program has also modified its application system, allowing any artist from West Philadelphia to apply in an effort to make the program more inclusive. In previous years, applicants had to be nominated by previous artists or board members, said AIR manager Gina Renzi.

The program’s artists often hold workshops with local schools or contribute to public works, such as a mural at the Rotunda.

Epstein said some AIR artists have continued to work with the schools that they collaborated with during their residencies.

“Basically, we are interested in making the arts at Penn visible,” as well as making West Philadelphia artists visible to the University, Director of the Kelly Writers House Jessica Lowenthal said.

This year, residents are working together to hold a panel about art that incorporates multiple genres to exemplify the “energy and creative impulses” that ArtsEdge supports, Lowenthal added.

The program helps foster a sense of community by enabling artists to live and work on the same block, according to Renzi. Previously, artists were housed together. ArtsEdge now offers separate apartments for its residents.

“Trying to imagine how two strangers live together made sense in the abstract,” Renzi said. Practically, it added a “strange wrinkle” to the project, prompting the need for separate quarters.

Before they were accepted to ArtsEdge, the artists in this cycle were worried about finding affordable housing in Philadelphia, Renzi said. 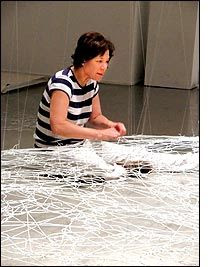 By Kaley Lacovetta
Special to the UC Review

Like most artists, Cecilia Paredes always dreamed of having a studio of her own. For years, she worked from her small apartment, sectioning off a meager mock studio space with curtains. Her limited workspace hindered her from creating the large-scale pieces she longed to make. Yet as most local artists know, finding affordable studio space in the city can be an arduous, if not impossible, endeavor. So when Paredes saw flyers for 40th Street AIR’s free studio program, it seemed as if her desire for space could finally be fulfilled.

And after much patience and persistence, Paredes’ wishes were granted. "I kept calling and calling, asking is it time to apply yet," says Paredes. The conceptual artist was accepted into the program last summer, and has recently begun work on her biggest project yet, an enormous labyrinth.

40th Street AIR, an acronym for Artist-in-Residence, seeks to alleviate the plight of the artist by providing free studio space in exchange for community outreach. Artists are provided with rent-free workspace for one year. Currently, AIRSpace has two facilities, at 4007 and 4013 Chestnut Street, for a total of five studios. Both buildings are owned and funded by the University of Pennsylvania. While in the program, artists are encouraged to share their talent with the West Philadelphia community by holding workshops, teaching art classes, creating public art, etc. Paredes contributes by leading a workshop at a local school, teaching 8- to10-year-old children how to create art with found materials in nature. She reminds herself and the children, "You don’t need any money to do art. You can do art from a twig." The outreach opportunity has blessed Paredes. "It proves that it is also the one who gives that receives as much as the pupil or receiver."

The program was founded in 2003 by artist and current director of the University City Arts League Edward M. Epstein in an effort to create "studio space for service," and also as part of a movement to make 40th Street more "artist friendly." Epstein emphasizes art as an essential element of community culture. "Our mission is to help emerging artists in the neighborhood." In fact, in order to be considered for the program, an artist must either live in or be strongly affiliated with the West Philadelphia area. Epstein understands that many local artists remain under-recognized due to a lack of workspace and the difficulty of finding an outlet in the community for one’s art. The program serves to "assist in the career growth and provide exhibition opportunities" for local artists.

West Philly native Vinson Houston is another one of over 40 artists who have benefited from the program. Houston has always been actively involved with the arts in the community, primarily through teaching, both at the Spring School of the Arts and the UC Arts League. It was at the Arts League that Houston met Epstein, who encouraged him to apply to AIR. The program’s goals for neighborhood outreach mirrored Houston’s own ideas. "It’s using art as a form of activism or community advancement."

At present, Houston is using AIRSpace to work on his performance piece titled "La Primavera," the story of a matriarchal agricultural society with a powerful secret hidden deep within its caverns. He has also returned to the Spring School of the Arts to assist the children with their end-of-the-year theater performance.

Other artists in the program include photographer Glen Sacks, performance artist Joanna Quigley, and visual anthropologist Beth Uziak. Sacks works with the People’s Emergency, and Quigley provides free dance classes for the community at the Rotunda.

Currently, the program is looking for individuals to join its newly formed Steering Committee, a community group that will assist in making crucial decisions about the future of AIR. If you are interested, send e-mail to 40thair.program@gmail.com. For more information on 40th Street AIR or to download an application, visit http://40streetair.blogspot.com.
Posted by 40th St Artist in Residence Program at 3:48 PM No comments: Links to this post