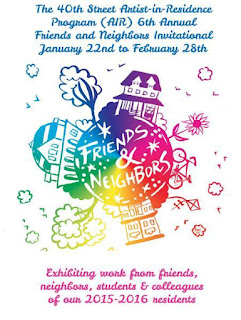 Exhibiting work from friends, neighbors, students, and colleagues of our 2015-2016 residents

CLOSING RECEPTION IN HONOR OF LEAP YEAR'S EVE! Sunday FEB 28 • 4-8pm • free buffet dinner and live printing
Our opening reception was marred by the blizzard so we REALLY hope to see you at the closing!

ANGELA MCQUILLAN
http://www.angela-mcquillan.com/
Artist Statement (truncated)
My creations are not bound to any one type of medium, instead I explore different materials, textures and surfaces to express my own interpretation of the world around me.  Through my scientific background I have gained a deep appreciation for biological forms and anatomical subjects. I have always found beauty in microscopic images and in cross-sectional explorations of bodies and plants. I am drawn to the multiplicity of repetitive patterns which occur on both small and large scales in nature. I use scientific imagery as a starting off point to explore my own imaginative internal characters and landscapes.  These biomorphic forms offer a unique visual language that breathes and communicates on the deepest levels of our perception.
(invited by AIR resident Erin Bernard)

Some guest artists will have work for sale. All sales benefit the artists; AIR does not take a cut. Support local art!!!
Posted by 40th St Artist in Residence Program at 5:59 PM