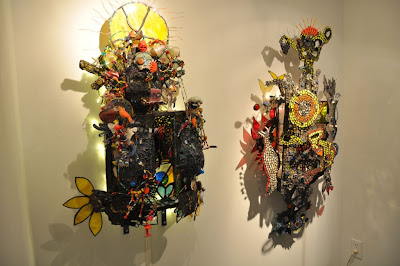 The following article by Emma Eisenberg testifies to the excellent "Friends and Neighbors, Artist Invitational" opening 40st had on January 13.

Despite the cold, the intimate gallery space at 4007 Chestnut was filled to the gills Friday night to see new work by West Philadelphia visual artists. The invitational format of the show, in which the artists currently in residence at the 40th Street Artist-in-Residence Program invited other artists whose work they admire, made for a diverse and full bodied show. Althea Baird’s tracing paper and india ink print (pictured left) was a highlight, bearing resemblance to a sepia toned photograph, and spoke to, in her words, “our body’s ability to remember.”

Other favorites were Corina Dross’ detailed portraits of graphic artist Lynda Barry and writer Zora Neale Hurston, designed to look like oversized playing cards, and Celestine Wilson Hughes’ bold glass sculptures “Black Madonna” and “Women of the Universe Do Not Drown in Three Feet of Water” (pictured below) which were shaped like cabinets containing human hearts and were reminiscent of Mexican folk art’s raw renditions of love and death. ”They have to do with women, and with fear,” said Hughes during the brief artist talk.

But it was born and raised West Philadelphian Brian Bazemore’s work that perhaps best summarized the exuberance, delicate hope, and community pride that was palpable in all the works Friday night and in the crowd itself - his approximately 10 ft by 4 ft wooden “testimonial” board made with plywood and spray paint bore the inscription “Use each setback, disappointment and success as a cue to push forward/ahead with more determination than before.”

The show is running until January 27.
Posted by hadleypaint at 11:41 AM