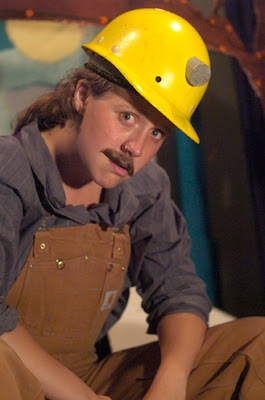 Sarah Lowry is a director, performer, dancer, pilates teacher, and community organizer in Philadelphia and beyond. She has been a founding and full-time member of The Missoula Oblongata since 2005. Recent company productions include Clamlump, The 50 Greatest Ladies and Gentlemen, The Daughter of the Father of Time Motion Study. Here in Philadelphia the company has also become known for their annual ‘Secret Shakespeare’ productions in which artists from all over the country join local Philly performers in one giant show. This year’s Antony & Cleopatra began at the Girard Street subway and led a100-person audience on a parade through the five acts performed by 5 difference different companies, with drinks and desserts served along the way (June 2011). In addition to her work with The Missoula Oblongata, she has worked in a variety of capacities with artists here in Philadelphia; Pig Iron Theater Company, Puppet Uprising, and Ramshackle Enterprises, to name a few.
Currently, Sarah is working on a dance/clown/puppet performance piece with Beth Nixon of Ramshackle Enterprises that began with an interest in The Mill Creek, a river that flows underneath the concrete of West Philadelphia, where Beth and Sarah live. This piece is scheduled to premier January 2012. When not performing, Sarah organizes with anti- fracking organization Protecting Our Waters as well with the Philadelphia Collaborative for Reproductive Justice and Support.

Sarah divides her time between her work here in Philly touring with the Missoula Oblongata and biking over mountain passes in Montana.
Posted by hadleypaint at 12:48 PM