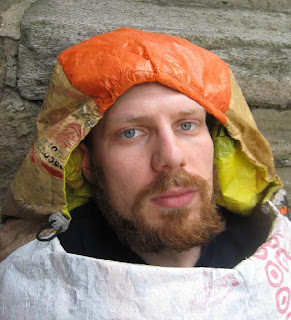 Above: 2011-2012 40th Street artist Michael Konrad is sheltered by his sleeping bag sculpture made from recycled plastic. For more photos and details about the project, visit www.konradprojects.net/2010/sleeping-bag.

Michael Konrad's sculptures contemplate the different functions of materials in a post-industrial world. Through his exploration of the built environment, Michael’s work is informed by careful observation of common objects and architecture of the city. His work explores the alternate functions of objects and structures in varying states of construction and decay. Through Konrad's sculptures we can imagine an environment where objects once considered disposable become valuable resources in a world that favors re-use over waste.

Michael Konrad received a Master’s degree in Studio Art from New York University in 2005. He has exhibited in various cities across the United States and is a recent recipient of the 2010-2011 Fleisher Wind Challenge Award. More information is available at the artist’s website: http://www.konradprojects.net
Posted by hadleypaint at 3:47 PM