Ana B. Hernandez was born in Spain from a Spanish mother and a Puerto Rican father. In 1997 she moved with her family to Florida, where she obtained her undergraduate education. In 2003 she moved to Philadelphia to pursue the Masters of Fine Arts in Fibers and Textiles at Temple University-Tyler School of Art. After graduating in the spring of 2005, Ana attended the Skowhegan School of Painting and Sculpture Summer Residency in Maine, and was invited for a two year long artist residency at Taliesin, the Frank Lloyd Wright School of Architecture. Back in Philadelphia since fall 2007, her work has been included in a diversity of local and national solo and group exhibitions. She was a recipient of the Oasis Arts and Education Fellowship in 2009. Ana is currently a fellow in the Center for Emerging Visual Artists 2010-2012 Career Development Program and a resident at 40th AIR. 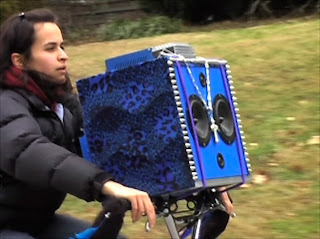 Andria Bibiloni-Morales explores the divide between art representative of culture, and art produced from within a cultural community. Through research and collaboration, she strives to create new possibilities for communication about sociopolitical and interpersonal issues. By immersing herself in situations where cultural identity is consequential, she aims to provoke viewers into a confrontation and analysis of their own preconceptions. These interventions are dependent on context – how the artist perceives herself, where she is, and how she relates to her surroundings. The resulting work is multidisciplinary, consisting of mixed media sculptures, self-portraits, performance based videos, and site specific installations.

Andria Bibiloni- Morales’ work has been exhibited at Labor K1 in Berlin, Virginia Commonwealth University in Richmond, Projects Gallery in Philadelphia, the Ice Box in Philadelphia, and the CUE Art Foundation in New York. In 2008 she was awarded a Joan Mitchell MFA Grant for her work in mixed media sculpture and installation. Andria currently resides in Philadelphia where she teaches at the Tyler School of Art.

Chris Lawrence is an artist working in a variety of disciplines including sculpture, installation, sound and digital media. Born in upstate New York in 1976, Chris resides in Philadelphia, PA where he received an MFA from the University of Pennsylvania. His works, often made from DIY construction materials, repurposed consumer goods and components recycled from his previous installations often suggest building sites, improvised shelters, vessels and industrial stations in various states of completion or disarray. The functionality of these spaces tends to waver between specific, frustrated, absurd or unavailable. Overlapping fantasies, disrupted timelines and fractured memories feed nonlinear narrative undercurrents at play. Lawrence has exhibited his work in New York, Philadelphia, Washington DC and Melbourne, Australia. 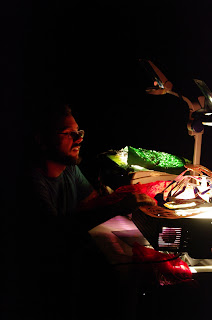 I am a self-taught printmaker, illustrator, shadow-puppeteer and editor/self-publisher of numerous publications. My hand-cut images are intricately detailed yet bold and graphic. I draw from narratives both implicit and explicit to create art that inhabits the complex terrain of myth. My work explores social and political themes, from everyday alienation to international conflicts to more subtle expressions of hope, dread and endurance in an often troubling world. I frequently work collaboratively with other artists or activist campaigns- such as in imagery created for urban farming and prisoner advocacy groups- and collectively, most prominently as a founding member of the Justseeds Artists’ Cooperative. I’m increasingly challenging myself to find new ways to combine my varied interests & practices- such as a small artist’s–book-&-CD “label”, a “banner library” on the theme of liberation, and installations and performances that incorporate cut, printed, painted & projected elements. 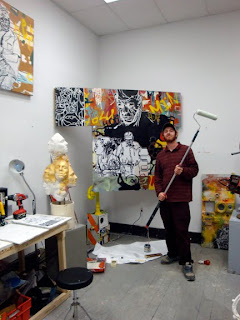