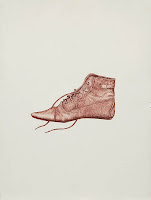 Hey folks!
It's about that time----the time for our annual exhibit of local artists whom our residents know and love--their friends and neighbors!

Our 2012-2013 residents Fatima Adamu, Mike Harpring, Diedra Krieger, Thomason Parnes, and Celestine Wilson Hughes, invite you to Friends and Neighbors, which has become a yearly tradition. Rather than showing our residents' work, our residents invite artists with strong ties to the neighborhood to show their work for a 3 week-long exhibit.

Mike Ball
owns an old house in West Philly, rides a bike to work, and tries to find time to draw every day.

Shawn Beeks
is a graduate of University of the Arts where he gained an MFA in painting while running Slapstik Skateboards from various closets in Philadelphia. Shawn’s work focuses on a fine art approach to illustrating human behavior with an unconventional sense of humor. In 2012 his work shifted towards Truism with the intention of rebelling against the limitations of escapism by making the products of the unreal real. Shawn has shown work in galleries that are no longer open.    “I could ramble on and on about this idea of Truism, and how it’s some kind of rebellious art movement against the rising popularity of fantasy in pop culture, but it’s really just fun for me to place the figments of our imagination in the context of reality just to kill the cute.”

Russell Brodie
I have been studying painting for about eighteen years, since the summer of 1994. As a teenager, I studied landscape painting and classical figure drawing. Most of the work I’ve done since then been representational. Since 2002, I have been painting on a very small scale. I have discovered many practical benefits to working at this size, but I have also found that the small scale continues to resonate with viewers. When people are drawn in close to examine the details of the painted surface, I’ve found I can more effectively convey the experiences that inspired me to create the paintings.

Sarah Brown
lives and operates her Etsy vintage shop, Mouse Trap Vintage, in a West Philadelphia apartment that she shares with her cartoonist husband, Brian “Box” Brown, and their two cats, Louis and Buster. She channels most of her creative energy and all of her regular energy into scouring flea markets and thrift stores, curating shop updates and photographing vintage. Sarah has an affinity for nature, animals, scouting and humor, themes which often appear in her artwork and the vintage items she curates for her shop. For this exibition of small works, she's just rediscovering her love of art-making with this series of drawings of "Rare City Wildlife Identification Badges" (hopefully soon to be real badges available for sale in her Etsy shop!) and found object assemblage.

Betty Leacraft
I consider myself a shape shifter of textile forms creating art works which blend multiple fiber processes and surface design techniques. Two wearable art silk scarves display surface design in the form of improvised Turkish marbling. The scarf patterns were inspired by the continuous movement of ocean waves and the contours of solar eruptions.

Kylin Mettler
is both the name of the artist and a mythical dragon made out of 8 unique animals. Kylin, the dragon, loves to be the barer of good news, the bringer of luck, and the fiery protector of the kind-hearted. Kylin, the artist, loves to find disparate parts and bring them together into found object art, human-animal conglomerates, wildly decorated birds and jewelry of animal whimsy. She loves to steal liberally from nature, and from the utilitarian man made world. Her love affair with biology only furthers her belief that the world is magical. She graduated from Rhode Island School of Design and never stopped being curious about new forms and new ways to play. Kylin has a three word motto that sums up her approach to life and art: Create, Play, Heal.

Jenna Peters-Golden
is an artist, organizer, and facilitator living in West Philadelphia.  She is delighted every day to be a part of AORTA, the Philly Stands Up Collective, Marginal Notes study group and the Terra Incognita Arts Crew. Jenna works hard to channel her nearly unhealthy obsessions with stories, books, and the unimaginable into art, political organizing and only friendly tricks.

Janis B. Pinkston
My concern for the environment compels me to re-use and re-purpose cast-off items for creating assembled, mixed-media sculpture. I have experimented with a wide array of re-used materials such as metals, plastics, wood, paper, cardboard, styrofoam, cloth and wire, along with found and discarded objects including buttons, toy parts, game pieces, hair rollers, beads, light bulbs, bottle caps, jars, containers and more. Many of the pieces are illuminated with previously used lighting devices, signifying the eternal quest for wisdom and enlightenment. Inspiration comes from blues, pop, jazz and other varieties of music. Art and artists from diverse cultures and age groups are among the muses that move my work. Themes are based on socio-political, musical  and personal subjects and often contend with the incomprehensible nature of the human spirit and psyche.

Abby Sullivan
has a Bachelor of Fine Arts degree with a concentration in photography from James Madison University and a Master’s degree in Environmental Resource Management from Háskólasetur Vestfjarða, an Icelandic University. She is interested in the crossroads between science and art. She currently works at the Wagner Free Institute of Science and as a freelance photographer.

Shinara Taylor
As a small child, Shinara showed a predilection for creativity. The pleasure of invention has been her sweetest obsession, greatest frustration, and brightest fire. It all humbly began in dime store sketchbooks, the southern countryside, and the craving for a story. She holds equal love for crafts and the fine arts. Informed by the human experience and the natural world, her main satisfaction is found in bringing to life what is useful, unusual, and lyrical. Shinara received a BFA from the University of Tennnessee, interned with the Women's Studio Workshop, and spent her first year in Philadelphia as a print-maker's assistant.
Posted by 40th St Artist in Residence Program at 9:18 PM